7/8/2011  Where are the fish?  There’s a lot of talk about run failure on the radio.  The Nush isn’t producing, Egegik is shut down right now, Naknek… well there is no real information.  We are still waiting for a real big push.

And we wait.  Lack of busyness leads to dissent.  Boy, both of the grumpies really get grumpy at the end of the day… as though they don’t have the energy to sustain all the way through.  Meanwhile, Bruce runs Josh in circles having him Rain-X the windows everyday and then tearing him apart for doing it wrong.  Josh bears it and smiles.

A long opener with a harried beginning…  Bruce has been dwelling on the broken bearing on the reel and we’ve been trying to get the right part ordered.  We haven’t been able to find anything with the right clearance and after much searching and some vomiting from anxiety – Bruce realized that the bearing had already given out and that it had dropped – it is why he had blown the seals on his twister motor last year….  ahhh… the can of worms.  Unfortunately, we realized this while down on the south line and only a couple of hours before the opener started.  Bruce, Nate, and I struggled to get the original bearing off but needed a gear puller…. so we had to motor back an hour or so to the river mouth and meet up with a tender.  The Vikoda Bay had the puller but without fingers but Diligence had it all AND a crane operator/engineer (Jimmy) with the experience and the will.  Long story short, the old gear gets cut off, the shaft filed and ground down to fit the new bearing and on it goes.  We are back in business.  It’s not perfectly centered and there is some resistance but it’s definitely fishable and we are back and fishing.

We’re motoring to the north line now as we’ve done a few sets in the river mouth that have been slightly productive.  This morning ebb is the wild card because we haven’t been allowed to fish it for a while.  Todd’s up on the north line now and getting fish.  We gambled for not doing line sets and just having our net in the water… wrong gamble today… we’ll see.

We’ve been fishing short openers now for the last few days.  Yesterday we had a spate of particularly rough weather but we also had decent fishing (3500 lbs).  Today we have about 2500 pounds.

It’s hard not to be bored.  Not working enough.  Sitting around and doing nothing.  Yesterday, Josh and I had a couple of hours on the back deck in the lawn chairs sitting and talking and playing ukulele.

This morning Bruce gave me the heads up that his days are numbered.  I’ll be bummed to see him go.  It has been a great experience having him on board and also providing him with a new opportunity.  He’s a good guy and I’m glad to beable to hook him up with a couple of sweet jobs. 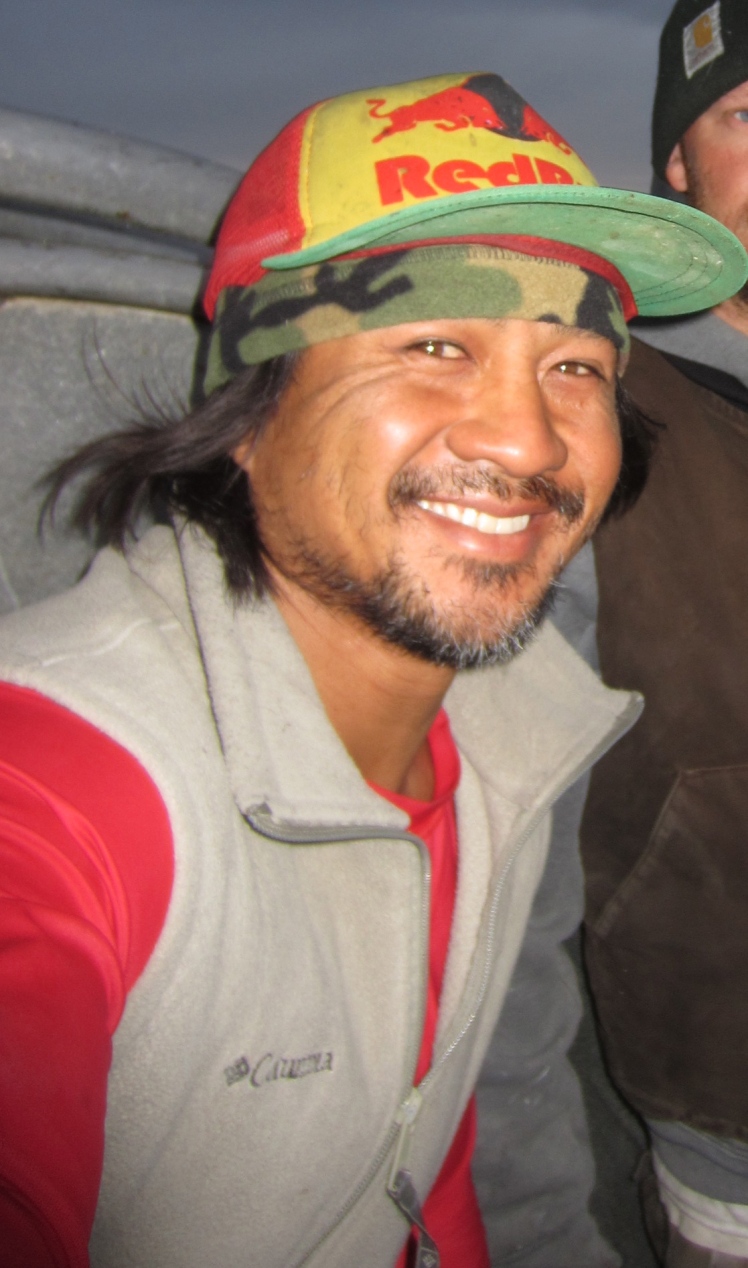 It looks like I strained a ligament in my right hand.  It’s swollen and I’ve been maintaining it with Ibuprofen.  Probably it’s from using my middle finger to pull fish over the leads.  It also doesn’t help that Nathan yards on the net occasionally when he’s frustrated or just in a hurry.  I’m sort of apprehensive about my days alone with Bruce and Nate.   Hopefully it will pass with a big push of fish.  Wrapping up the season will be interesting.

time will reveal.  we probably have only a few days left out here.  still catching two to three thousand pounds a day.  it’s still money but the brutality of the season has definitely started to wear.  weather rubs salt deep into those wounds.  my right hand is pretty swollen and my clothes are crusty with from sea water, sweat, and grease.